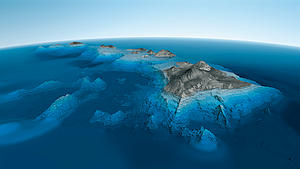 Formerly the group was known to Europeans and Americans as the "Sandwich Islands", a name chosen by James Cook in honor of the then First Lord of the Admiralty John Montagu, 4th Earl of Sandwich. The contemporary name is derived from the name of the main island, Hawaii Island.

The Hawaiian monarchy was overthrown in 1893 and the United States annexed the islands in 1898.  Hawaii became the 50th State of the United States in 1959.  The US "State of Hawaii" now occupies the archipelago almost in its entirety (including the uninhabited Northwestern Hawaiian Islands), with the sole exception of Midway Island, which is instead an unincorporated territory within the United States Minor Outlying Islands.

The Hawaiian Islands are the exposed peaks of a great undersea mountain range known as the Hawaiian-Emperor seamount chain, formed by volcanic activity over a hotspot in the Earth's mantle. The islands are about 1,860 miles (3,000 km) from the nearest continent.

So many things to do and places to see! Snorkeling? Diving? Kayaking? Zip Lining?  What a fun way to find your next Hawaii Adventure. You can view, print, or download any brochure. Included are links to BOOK DIRECT with each activity provider, visit their social media pages, or even contact them via email or phone if you have questions.

Are you a Tour or Activity Provider?
Don't Wait ! - ADD YOUR LISTING today!

Kauai is the northwestern most of Hawaii's major islands. Nicknamed the Garden Island, it is covered with lush greenery and tropical plants, watered regularly by abundant rainfall. As the oldest of the islands, it has been changed the most by the forces of erosion, and this has resulted in natural wonders such as Waimea Canyon and the Na Pali Coast. As a consequence of its age, Kauai also has more miles of sandy coastline than the other Hawaiian islands.

The only city on Lanai is Lanai City. For the most part, if one needs something, Lanai City is the only place they will find it.

The island of Maui is the second largest of the eight major islands.

Moloka'i is the fifth largest island of the major Hawaiian Islands and is the third oldest. Molokai is considered "The Most Hawaiian Island" with the most native Hawaiians per capita. Also called "The Friendly Island" because of the aloha from the residents.